For instance, the other day, the children had only been home from school for perhaps 20 minutes, but managed in that time to rip their room to complete shreds. It was outstanding. An Olympic effort of mayhem and chaos.

Mr B: – what on Earth… should we just burn it to the ground?

Around 90 minutes later I emerged, exhausted and dusty. I may have been shivering from shock. But the room was clean again. In fact it was *spotless*. The kids were given a talk about tidiness and respect. Which they happily ignored. Mr Bodysoluble took them through their bedtime routine, and said to me, “Tomorrow I’ll take them out of the house so you can properly unwind. Or study. Or sleep. Whatever you like.” I laughed it off like a joke, because that’s like offering to walk to the moon so your partner can become the Empress Du Cheesecake or something. Stop talking nonsense, Mr B.

But he was good as his word, and the next day, I found myself again in a silent house. This time alone, with the long afternoon stretching out before me, like a beige nylon stocking about to rip back and slap my face with the smell of feet.

That analogy was brought to you by The Laundry that I started on.

Next I tried to pull out the text books and study, but it felt almost immediately like I would have a better time with a nail gun and my own toes as target pratice. 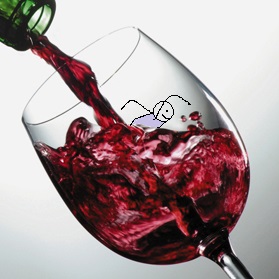 With one or two reasonable suggestions.

Until I found the suggestion of having a warm bath.

Brilliant, I thought. I nearly NEVER take long baths. I take showers, but never baths. Just in case you thought I was funky. The bad kind of funky.

So I went into the big bathroom, sized up the huge corner spa bath that I never use, and began to fill it. I thought, you know, I’ll ransack my cupboard of bath bombs and milks and things, that I also never use, and see if I can’t find something I could enjoy. I found some bubble bath, “with lavender for relaxation” it said on the label. Perfect! Poured a large quantity in. It’s a large bath. Wanted to make sure I got enough saturation to ensure relaxation.

Read some of my book while the water ran.

Bath filled, bubbles formed, and I sank in. 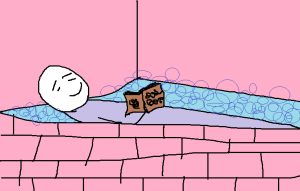 It was lovely. At first. Then I got bored. My book was on the ledge, nearby, and I reached over for it. Read it a while. Still kind of bored, and not particularly relaxed. 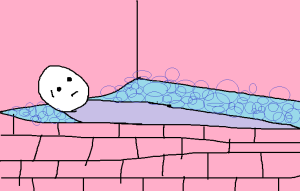 I was both bored and anxious at the same time.

I think this is a skill that almost every parent has mastered. I’d venture to say that there are long stretches of time when I am in fact comprised entirely and exclusively of these two emotions.

I put the book back on the ledge and noticed the button to start the spa bath. Sweet! I thought. This will be doubly relaxing!

I pressed the button, and let the water jets calmly and serenely …

… scare the living daylights out of me.

Once I got used to the noise and rushing turmoil of the spa bath, I started to kind of not hate it. It reminded me of roller-coaster rides as a kid. Where you scream and everything is terrifying and then at the end you want to do it again. Possibly just to see if you really did leave your soul on the top of the fourth mountain, cos it sure felt like SOMETHING left your body up there.

Anyway, I lay back and shut my eyes and tried to just vague-out for a while. Think about nothing. Relax… Reeeelaaaaax. Reeeeeeeeeeelllaaaaaaa- there are bubbles in my mouth.

And in my nose. What.

I opened my eyes, and the entire corner of the room with the spa bath in it was a pulsing hive of bubbles. With my head poking out of one end. There were bubbles all over the ledge so I couldn’t see my book or the kill switch. Bubbles frothing over the sides and on to the floor. Bubbles were climbing up all the walls, higher and higher, covering the lower windows and blocking the light. The bubbles were also increasing every second, and were crawling up my face and trying to devour me.

Well what the… for serious. No.

At this point two things happened.

1. I realised I had a problem.

Mr Bodysoluble walked into the house, so he tells me, calling my name, to find me and say they were home. I didn’t hear this, because of the noise of the spa bath, the distance from the bathroom to the door he came in, and the fact the bathroom door was closed. It was also covered in bubbles at this point.

I started floundering around, trying to locate the kill switch for the spa bath.

Mr Bodysoluble, hearing the spa motor, deduced where I was, and opened the bathroom door. And was rewarded with 13 cubic metres of bubbles to the legs.

Um. Is anyone in here?

Sudden deafening silence as I turned off the spa motor.

Oh. What are you doing?

You’re THAT out of practice?

Bubbles were quietly popping and sliding down the walls.

OK well, we’re going to watch a movie on TV. Call out if you need help.

He turned to leave.

Frothy bubbles popped and crackled all over the room. I gazed around at the mayhem and chaos.

Mr Bodysoluble poked his head back in the door.

Hosted children’s birthday party today.  Feel like it was a complete success.

That’s me, oblivious, and medi-caking in the midst of carnage.

This work by Bodysoluble is licensed under a Creative Commons Attribution-NonCommercial-NoDerivs 3.0 Unported License.
Based on a work at bodysoluble.com.
Loading Comments...